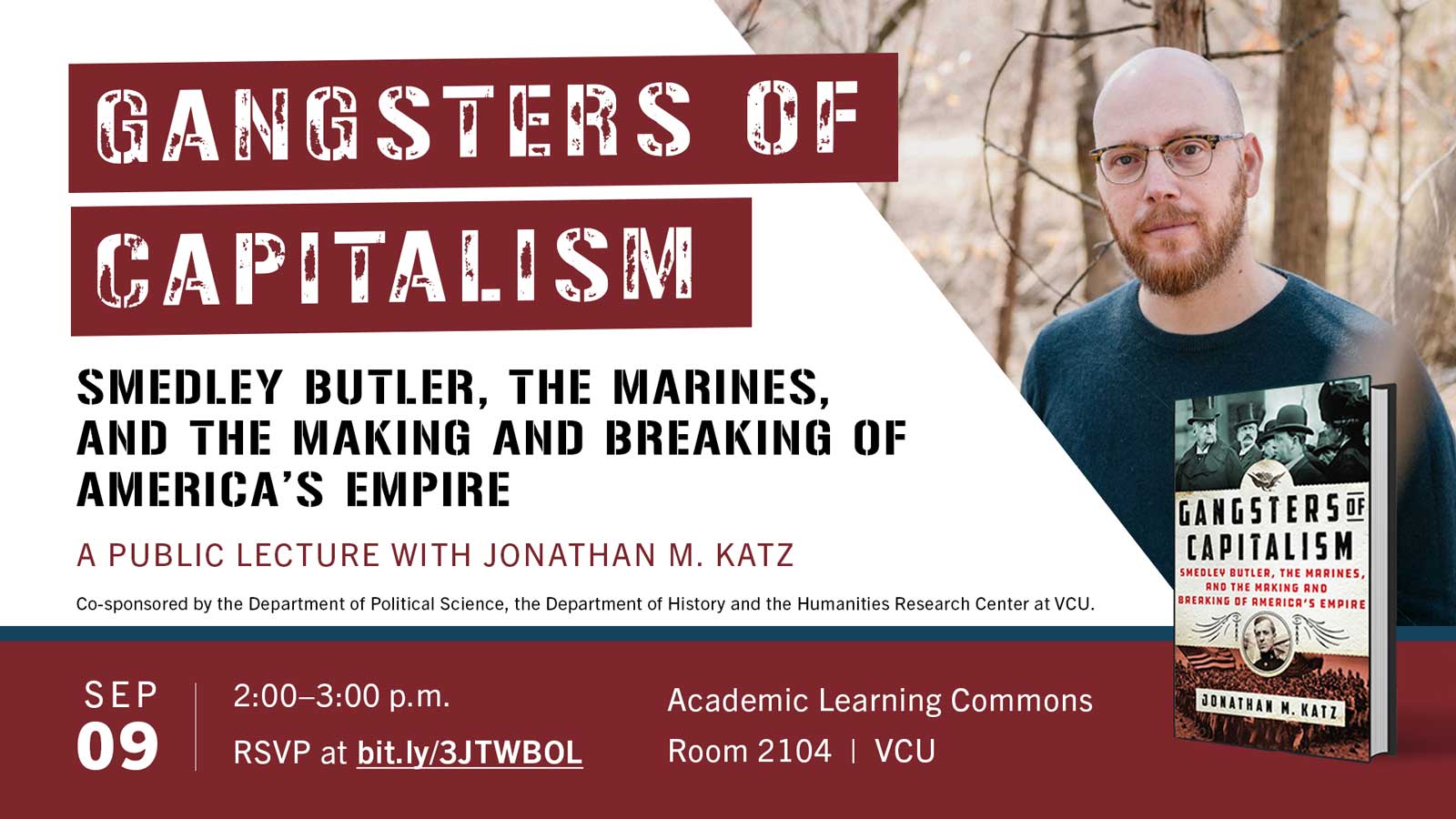 Jonathan M. Katz will present a public lecture for his book "Gangsters of Capitalism: Smedley Butler, the Marines, and the Making and breaking of America's empire."

Smedley Butler was the most celebrated warfighter of his time. Bestselling books were written about him. Hollywood adored him. Wherever the flag went, the "Fighting Quaker” went―in nearly every major overseas conflict from 1898 until the eve of World War II. From his days as a teenage recruit at the newly seized Guantánamo Bay, he blazed a path for empire: helping annex the Philippines and the land for the Panama Canal, leading troops in China (twice), and invading and occupying Nicaragua, Haiti, Mexico, and more. Yet in retirement, Butler turned into a warrior against war and big business. He said "war is a racket" and declared: “I was a racketeer for capitalism."

Jonathan Myerson Katz traveled the world recreating Butler’s journeys and pored over the personal letters of the Marine, his comrades, and his family on Philadelphia’s Main Line. In doing so, Katz reveals how memories of U.S. imperialism remain a vital force shaping politics and culture across the globe.

Tracing a path from the first wave of U.S. overseas expansionism to the rise of fascism in the 1930s to the crises of democracy today, Gangsters of Capitalism tells an urgent story about a formative era most Americans have never learned about, but that the rest of the world cannot forget.

The event is free and open to all and will be held in person.

Jonathan Myerson Katz is a journalist and author. His first book, "The Big Truck That Went By: How the World Came to Save Haiti and Left Behind a Disaster," was a PEN Literary Award finalist and won the Overseas Press Club of America’s Cornelius Ryan Award for the year’s best book on international affairs. He is also a recipient of the James Foley/Medill Medal for Courage in Journalism.

Katz was the Associated Press correspondent in Haiti when he survived and provided the first international alert of the deadliest earthquake ever recorded in the Western Hemisphere. Soon after he produced the first evidence showing United Nations peacekeepers had caused, and were covering up, a devastating post-quake cholera epidemic. His initial flurry of stories launched six years of further investigation by himself, epidemiologists, and legal advocates for the victims. In 2016, Katz obtained the first admission by Secretary-General Ban Ki-moon that the U.N. had played a role in the outbreak.

Katz was a 2019 National Fellow at New America. A regular contributor to the New York Times and other publications, he regularly appears on TV and radio and formerly directed the Media & Journalism Initiative at Duke University’s John Hope Franklin Humanities Institute.

From 2016 through 2021, Katz traveled across East Asia and Latin America and did extensive archival research to uncover the forgotten history of the rise of the U.S. global empire in the early 20th Century and its legacies today. The resulting book, "Gangsters of Capitalism: Smedley Butler, the Marines, and the Making and Breaking of America’s Empire," was released in January 2022 to rave reviews. It was a national bestseller on the American Booksellers Association list.